It’s been a while since I wrote a blog post and for that I do apologize. Between being a new dad, work, and training I haven’t had much time to sit down in front of a computer and blog. With that being said let’s get into todays post..My 2013 goal check in!

Last year I had three goals that I wanted to accomplish. As I reflected back and thought about 2013 I can honestly say that I achieved 2.5 of those goals. .5? Yeah I’ll get to that in a bit.

2012 was my break out year with leg locks. 2013 was the year I really started to understand them. All year long I added different positions and finishes to my game as well as refined everything that I had learned in 2012. My 50/50 game has vastly improved and I have recently been playing around with the Top Rock position. Both of these new positions have just made my leg attacks better. I also had the opportunity to share some leg lock knowledge last December with the advanced class at 10th Planet Van Nuys. Needless to say I have gained the reputation in my gym as being the leg lock guy. 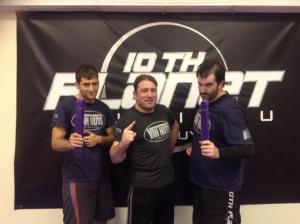 So now we get into the .5. This year I had the privilege of teaching one of the 10th Planet Van Nuys fundamentals classes. My time teaching was amazing. I was able to teach my art to new students, refine my own game, and even give several people their first stripe in Jiu Jitsu! During this time I really made an effort to create some sort of curriculum. While I feel like I had a good start, I never really found the perfect formula. Hence the .5. For most of 2014 I will be taking a break form teaching so I’m hoping to have some more time to work on some sort of set curriculum.

2013 was an awesome year both on and off the mats. My daughter was born, my wife and I celebrated our 1st anniversary, I handed out some stripes, and I received my purple belt from Coach Alder Hampel. With that being said, my goal is to make 2014 even better than 2013. Next week I’m going to break down my goals for 2014. Now in the words of Kurt Osiander…..Go Train!